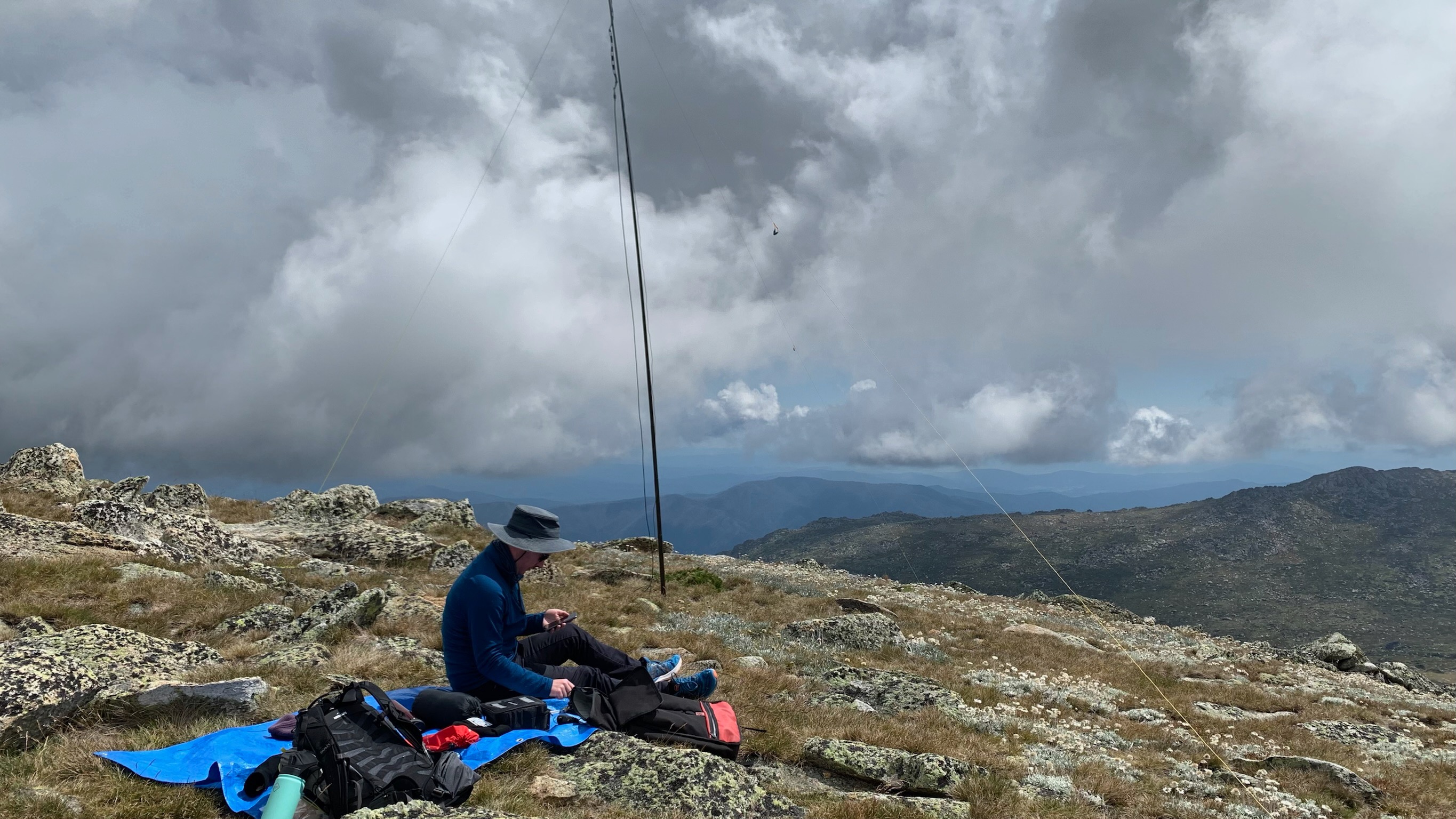 I was in Canberra for a wedding over the Labour Day weekend, and wanted to make the most of the opportunity to ‘drop in’ on Australia’s highest peak, Mount Kosciuszko, on the trip home.

After a few false-starts planning wise, I settled on activating The Cascades on Saturday, Kosciuszko on Sunday, and then driving home to enjoy a public holiday of rest. The following is my report on those activations.

Tip: if you are planning an activation in this region, be sure to check the SOTA summit information page for each summit in the region that you plan to activate, and follow any notification steps, ideally more than a week out from your planned activation date. I was requested to move my Kosciuszko activation to Sunday due to an event on the Saturday, so it can help to be flexible and not rushed while gaining any necessary approvals.

This was a very enjoyable hike. Though the car park was quite full, the trail itself was almost deserted. The total length for me was 10.63km with 384m of total elevation gain.

The start of the trail is next to the Thredbo River, and the trail follows the river for some distance. Though the river feels like a substantial drop away at some points, the trail crosses it a few kilometres up, which marks the beginning of a increase in climbing intensity. A few rest stops were required in the hotter-than-expected afternoon heat.

After a while the track drops off in elevation — I believe this is the signal that you should have gone ‘off track’ a few metres back. There is a ~10 minute bush-bash required to reach the summit. I think that my way of climbing down was superior to climbing up; keeping to the northern (earlier) parts of the trail should allow a more straightforward, less marshy approach. 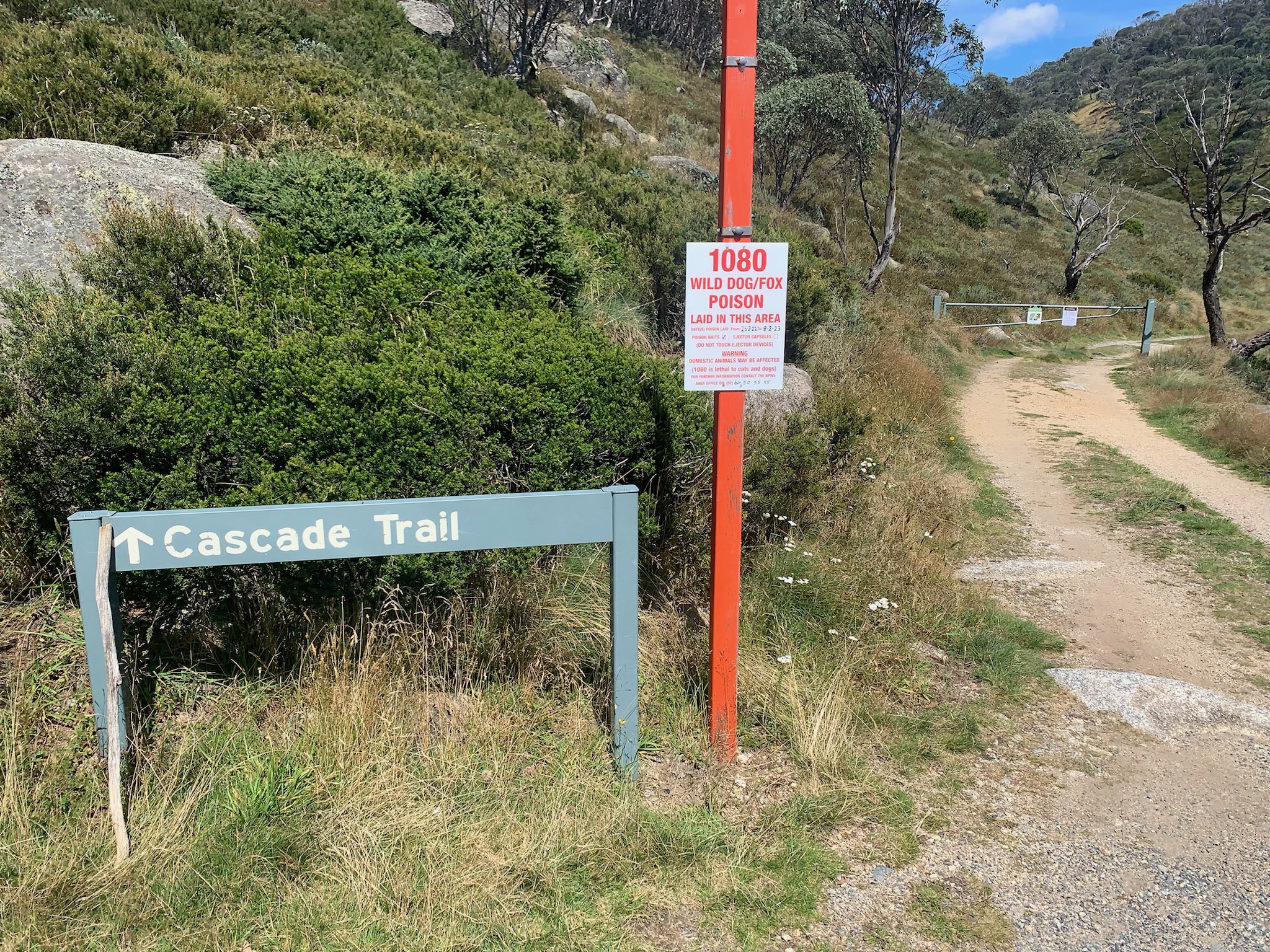 Start of trail, at The Cascades car park. 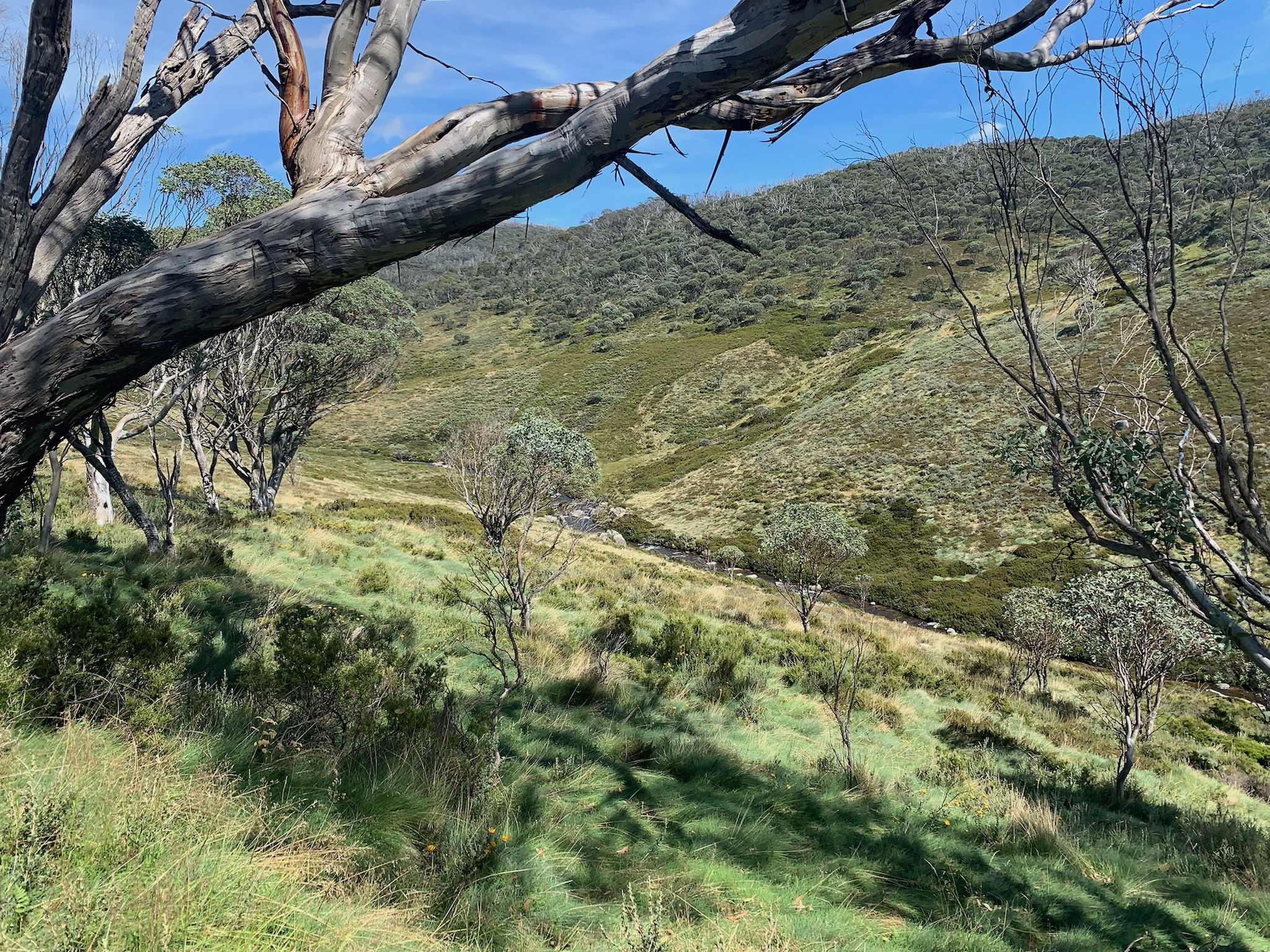 Thredbo River seems to get further away, but you will rejoin it and cross it shortly. 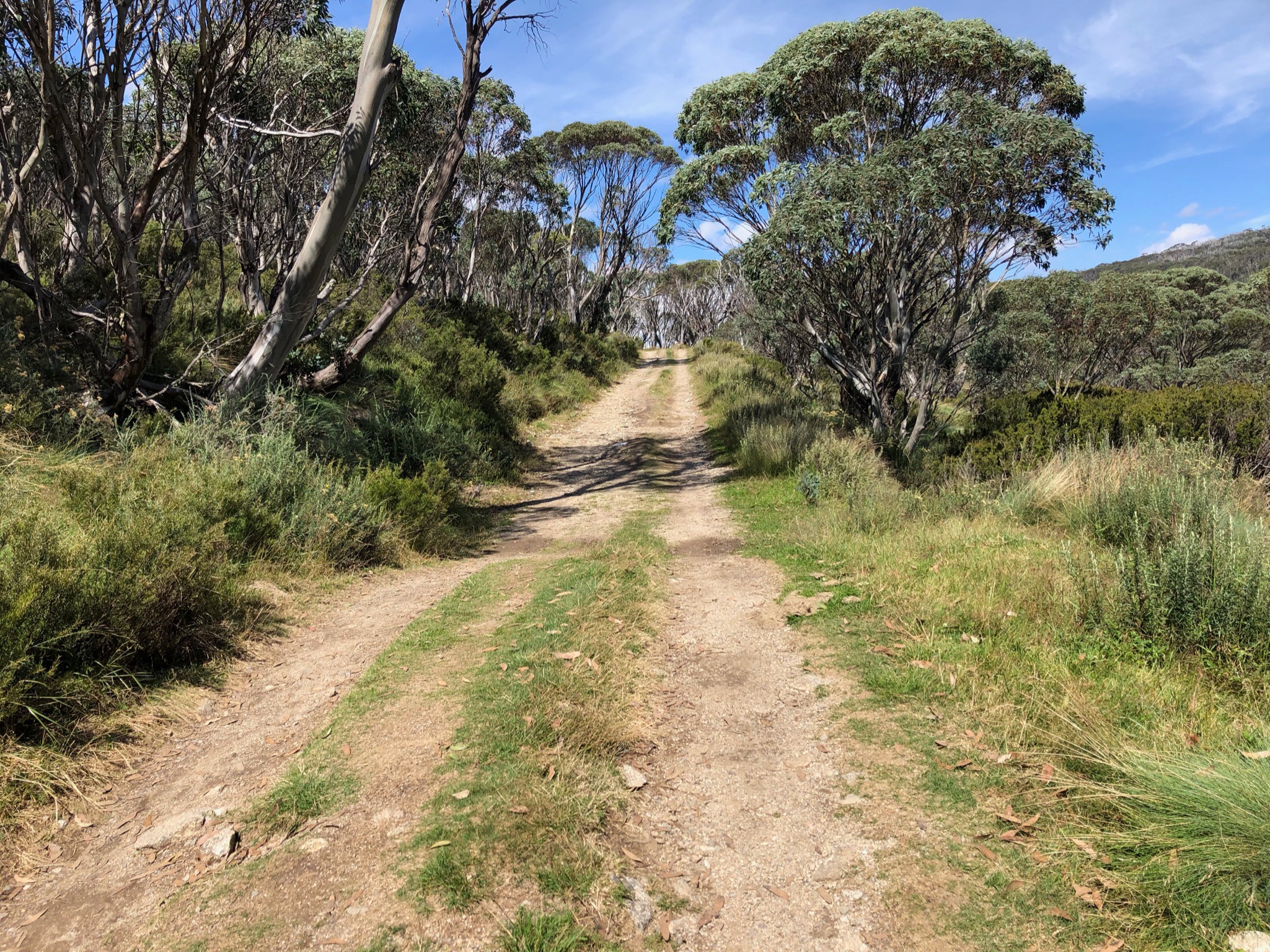 Typical of the first half of the walk. 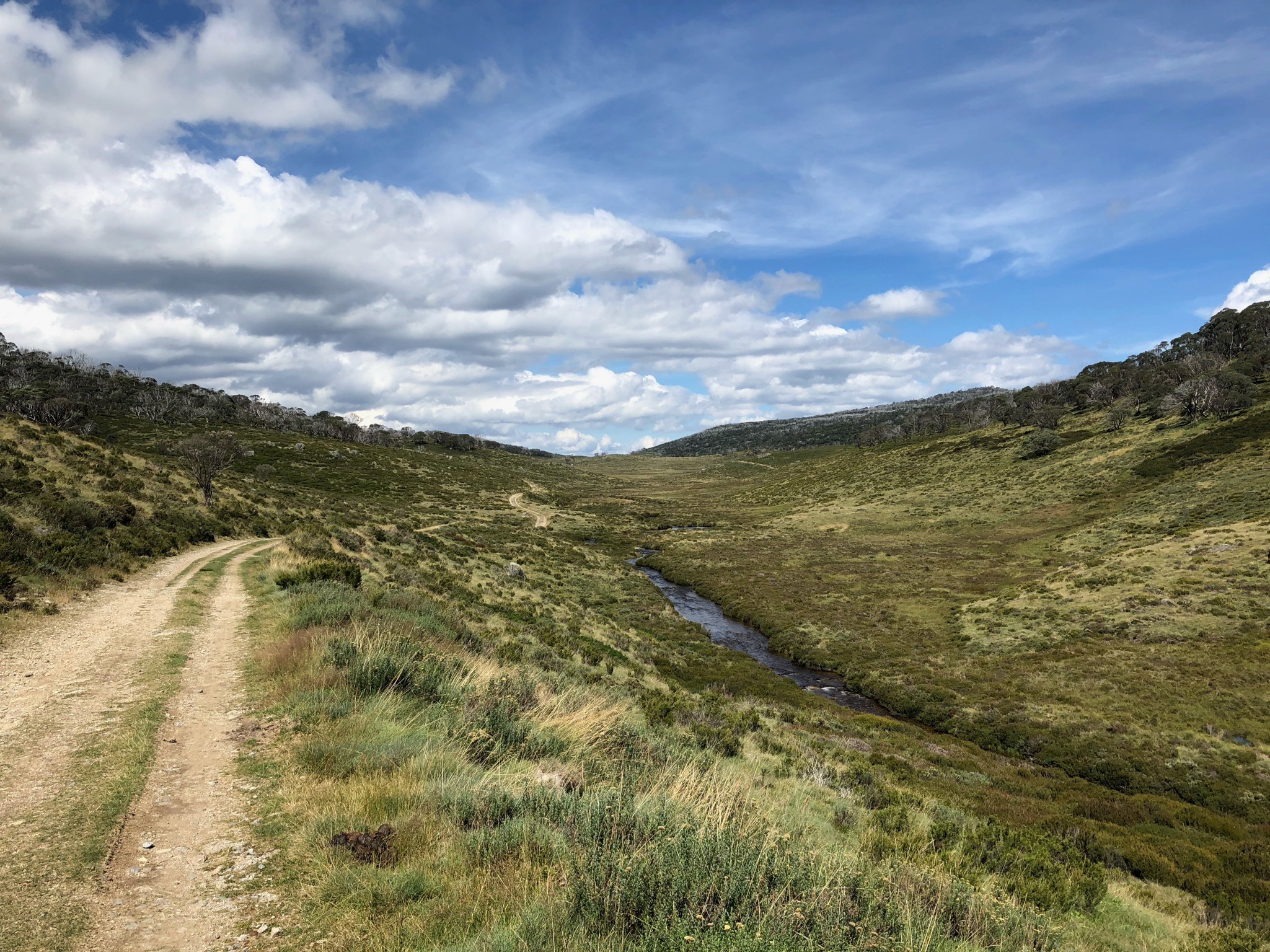 Before the Thredbo River crossing, the scenery opens up. 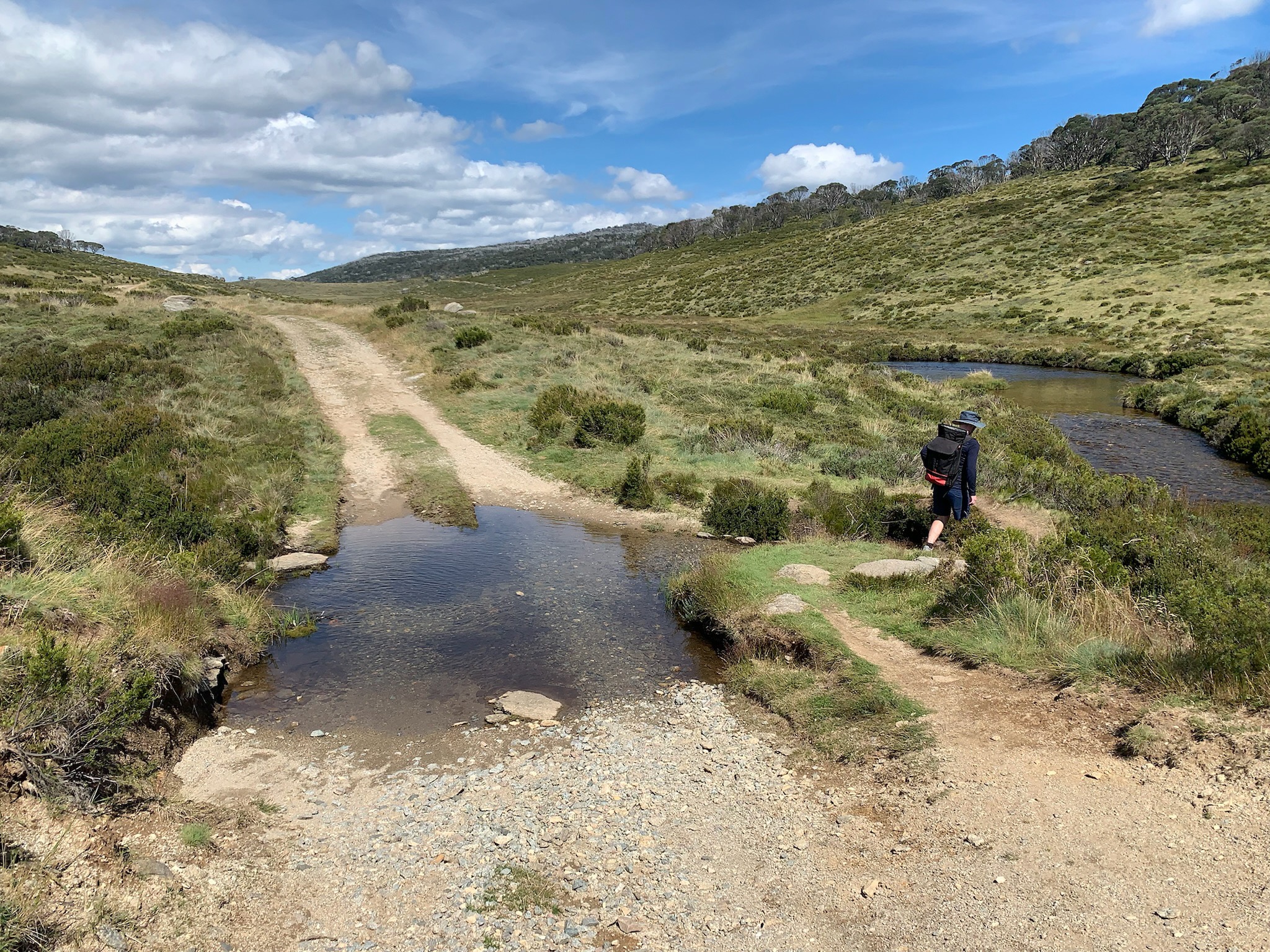 There is the occasional low-key water crossing (no feet got wet). 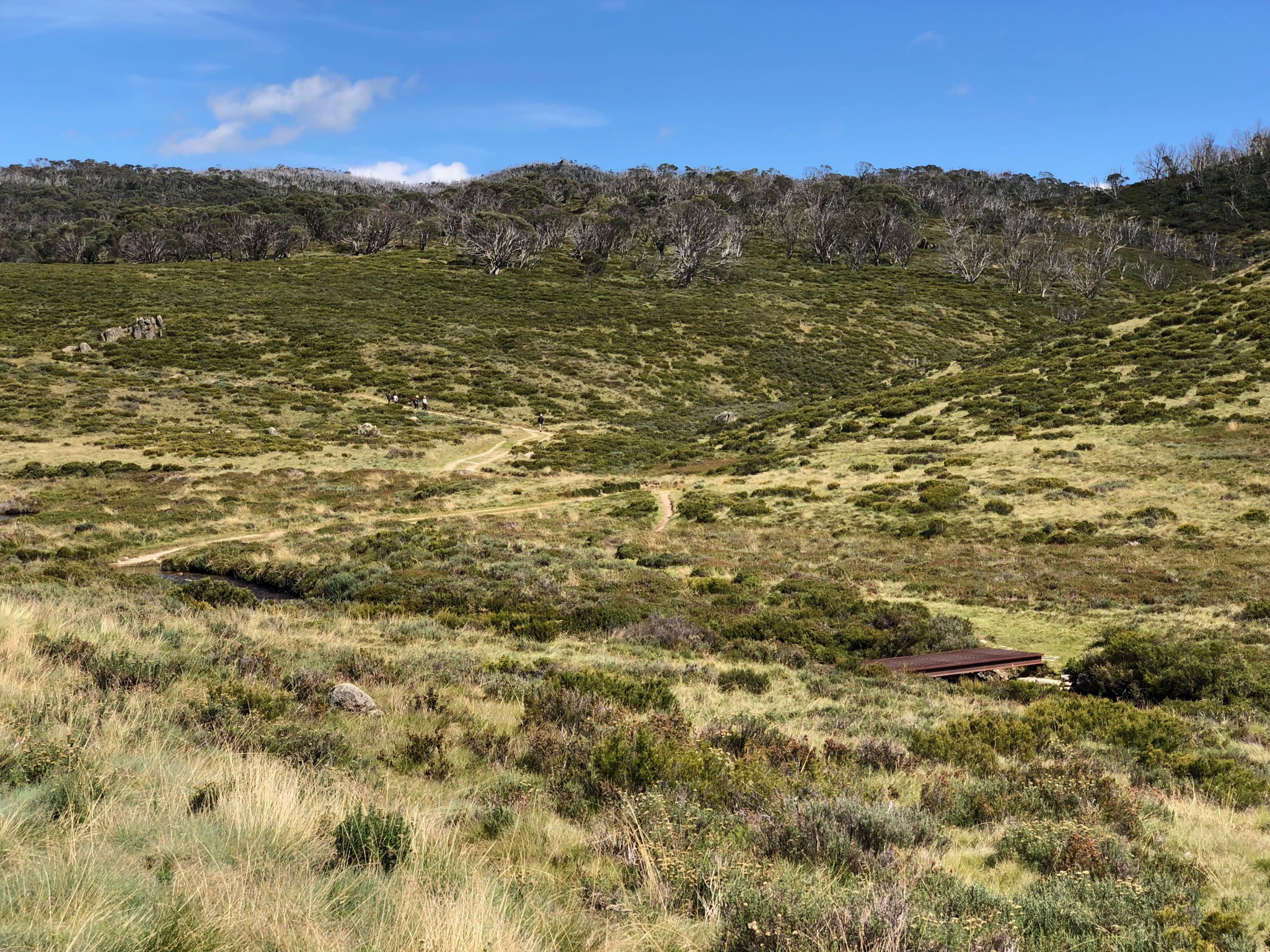 NSW National Park Service has set up a grate for easily crossing the Thredbo River. Those people further along the trail were the only we saw for the whole time on trail. 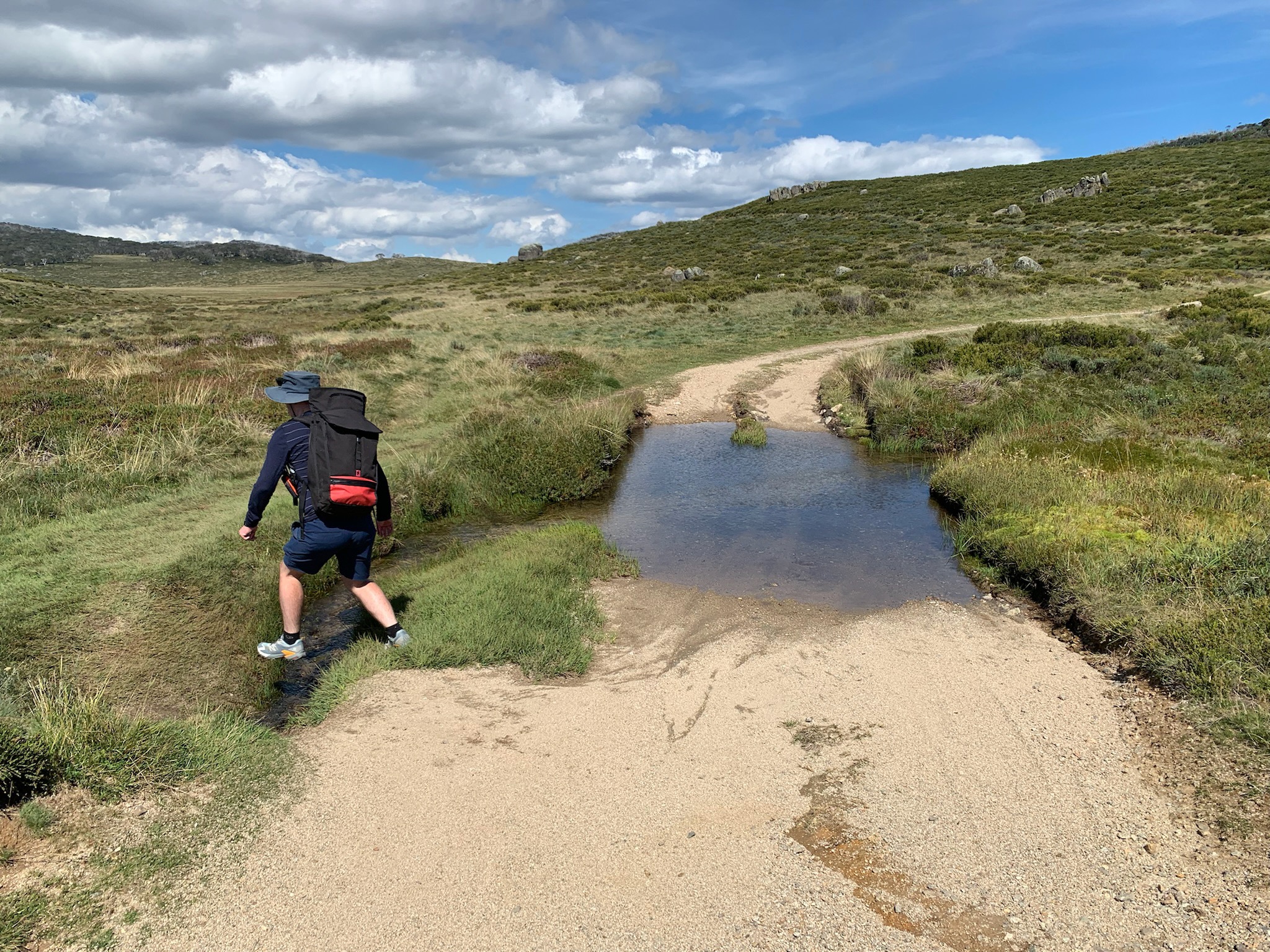 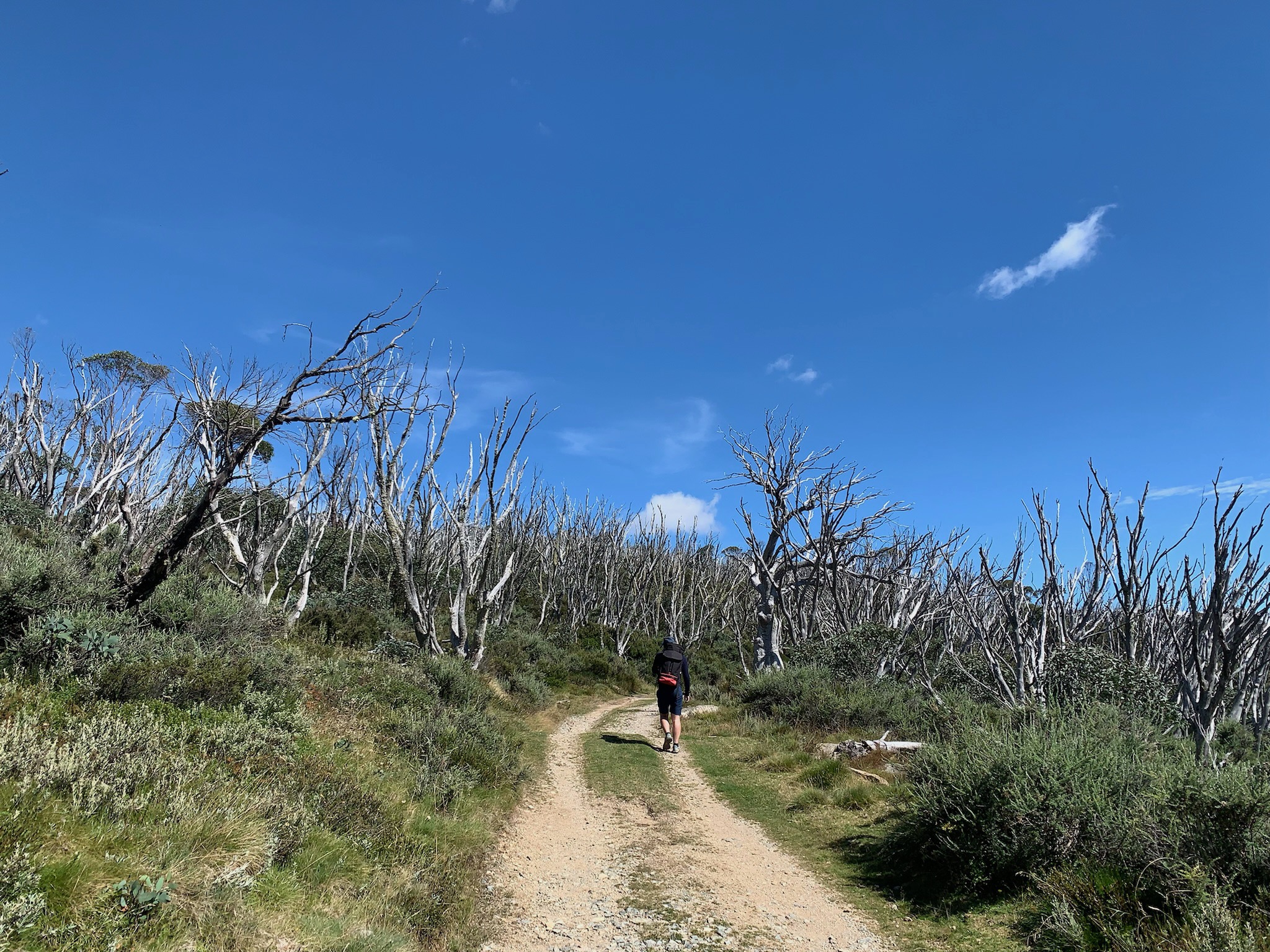 Approaching the summit, about to go off trail. 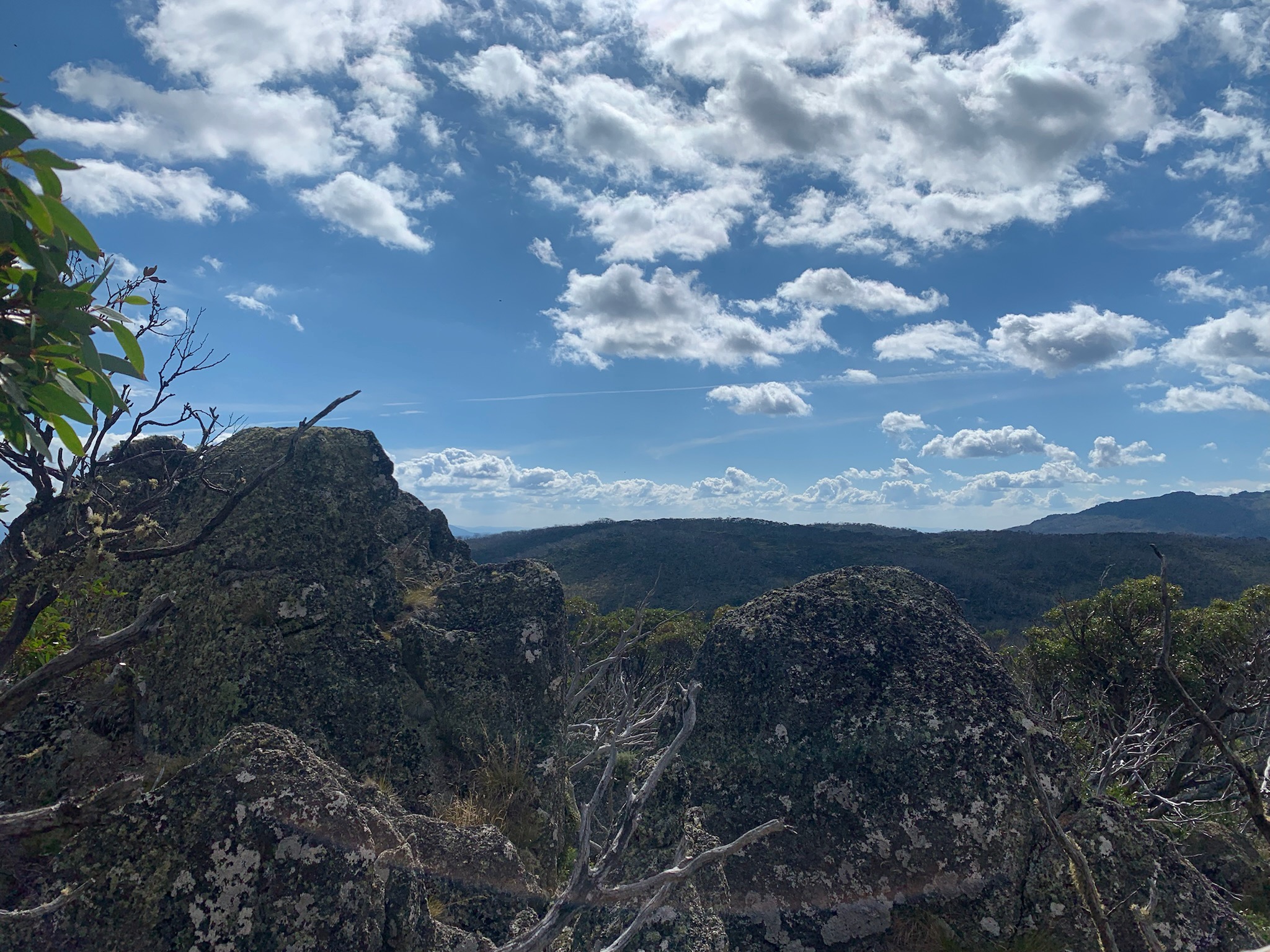 View from the top of the rocks at the summit. 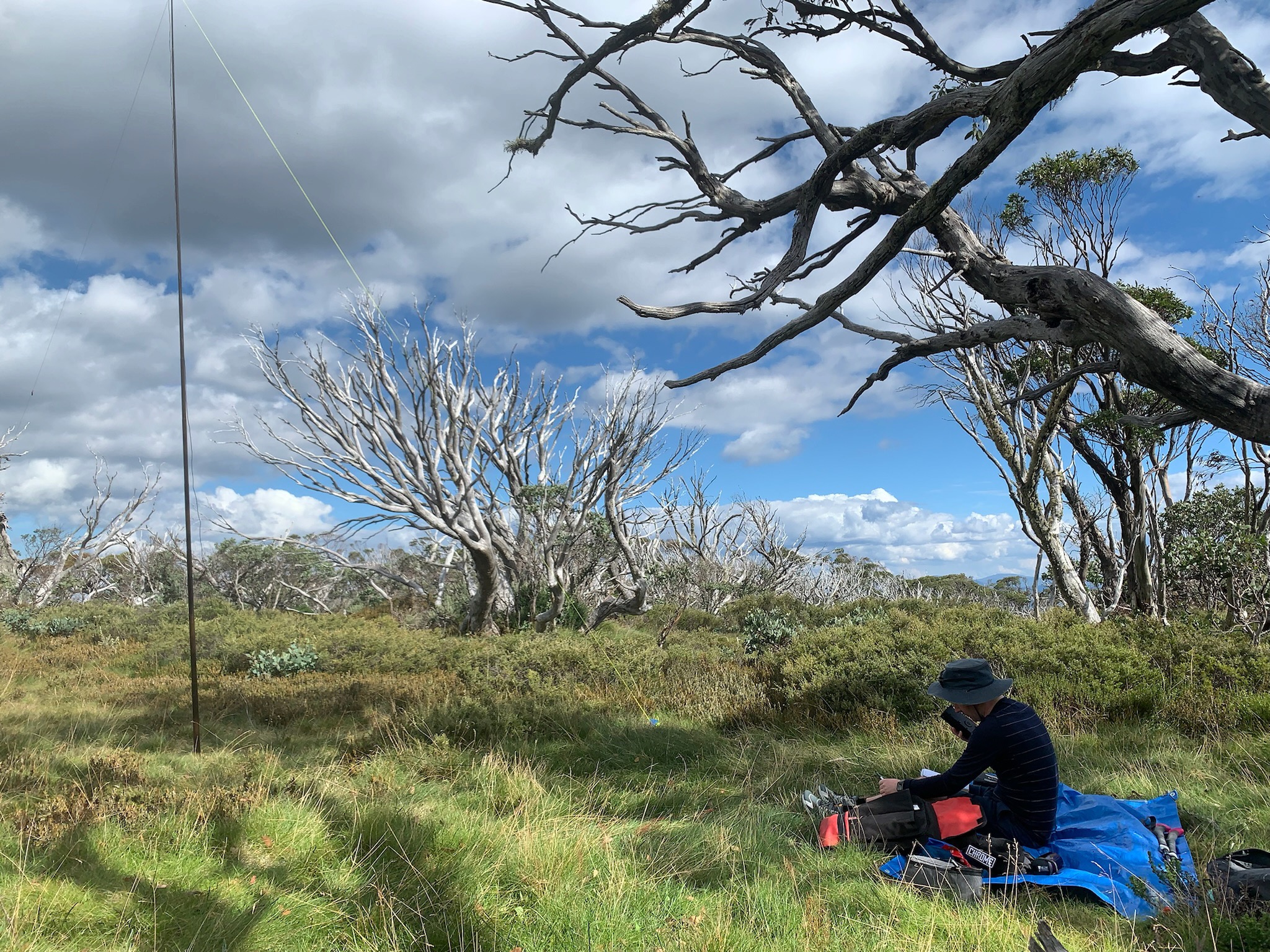 Set up and operating at the summit.

There is a surfeit of horse manure, and some care should be taken to avoid this, particulaly on the final bush-bash. No other pests were really found at the summit. I did realise that I did not know how to handle an encounter with wild horses, which from visible tracks seemed to semi-frequently use the summit, and made a note to look up how to deal with that when I got home.

The summit has some trees but plently of space for my inverted-v antenna setup. I was glad to have brought my tarp for sitting, as the ground cover is quite undulating and compressible.

The temperature in mid-March was very pleasant, and I only started to get cold after about 40 minutes of operating, and this was due mostly to having sweaty clothes from the climb. The views from the summit itself are not particularly expansive, but a climb of the boulders will provide reasonably nice views. I found the best vista to be on the trail as it nears the summit, particularly looking north-west.

APRS coverage is possible near the peak, and so can be mentioned to potential chasers for scheduling purposes. I used a 5W handheld beaconing every 30 seconds, and a ‘signal stick’ antenna poking out of my backpack.

The walk was reasonable and safe, however I wouldn’t look forward to doing it again unless I had small children. The path is an elevated metal lattice that is slightly unpleasant to walk on in runners, when compared with a gravel of asphalt type surface. If I were to activate this summit again, I would ensure I had more time and explore the options from Charlotte’s Pass.

The views along the trail on a clear day are expansive and impressive. Particularly as obstacles fall away, hikers are able to see for unfathomably long distances. I cannot speak for the views on other walks but imagine they are similarly impressive.

Navigation couldn’t be easier — stick to the well-maintained metal grates. Some small renovation was being undertaken during my hike, so there was a tiny portion that was off-trail, but extremely straightforward to rejoin. The throngs of people and clear path make it inconceivable that a hiker would get lost here in reasonable conditions. 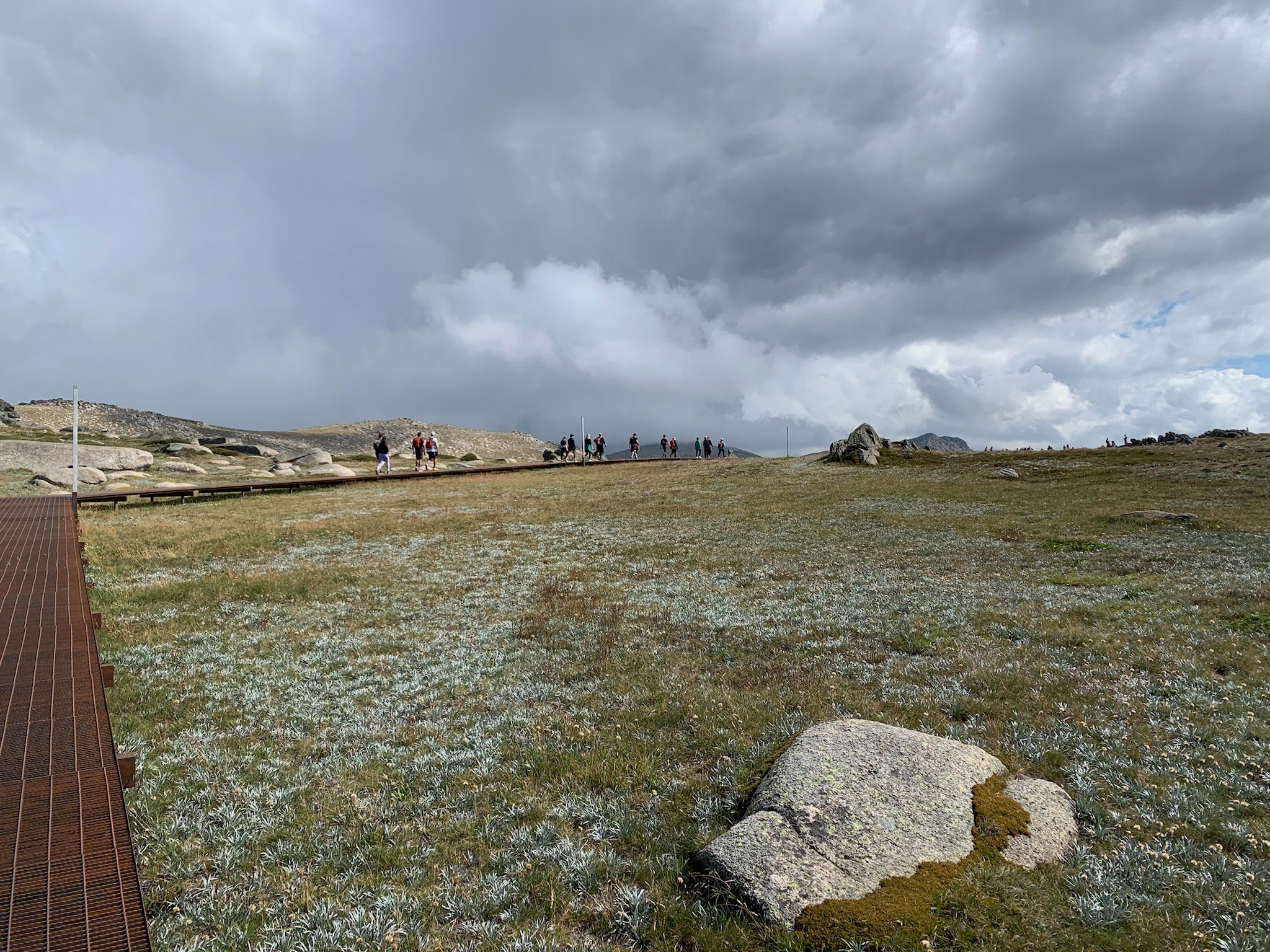 Near the start of the Kosciuszko walk. 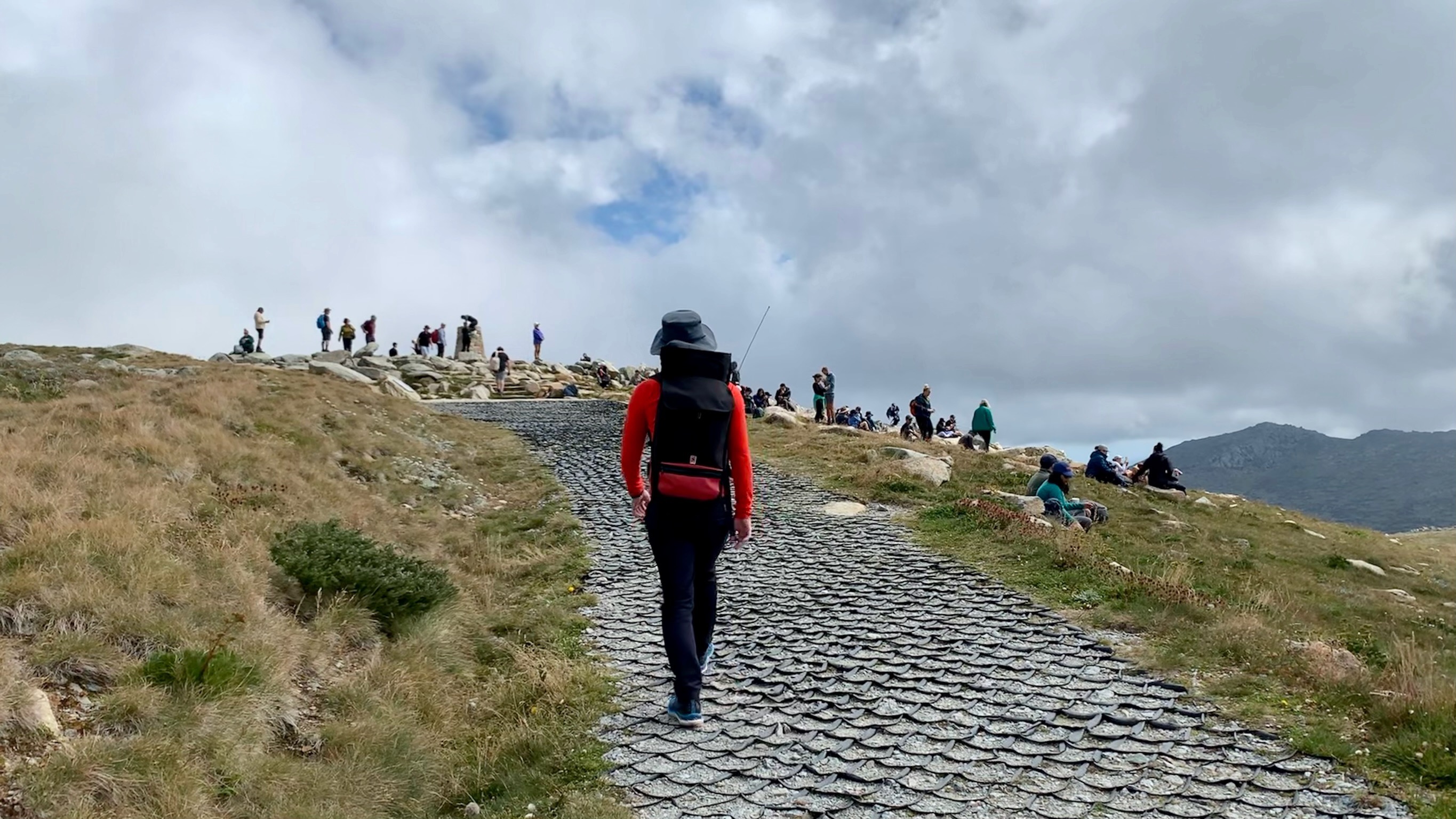 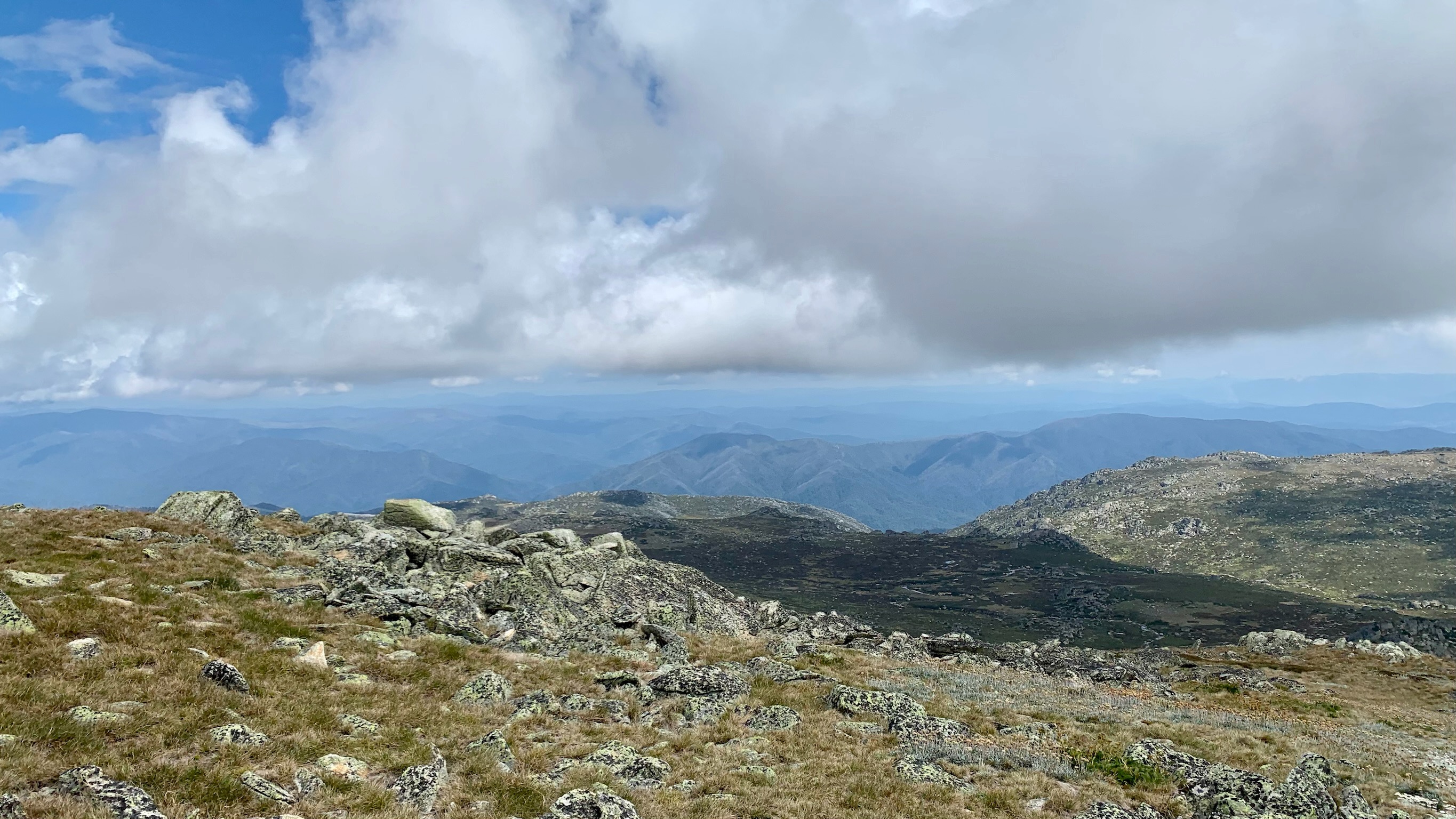 I had really ‘primed the pump’ with an email more than a week out to drum up interest in QSOs, so was pleased to get 23 contacts overall. I belive this is the highest number of contacts during my time doing SOTA.

I set up on the northern face of the summit, away from the throngs of people visiting on the long weekend. There was plenty of space well within the activation zone for me to set up and run my inverted-v antenna for 40m, and my roll-up j-pole antenna for 2m.

I was pleased to have an ‘eyeball QSO’ with Daniel VK1FDRC who happened to be at the summit with his family. He was familiar with SOTA and came to chat about radio. Hope to hear you on a summit soon, Daniel.

A few others occasionally came nearby to take pictures towards the north, or ask me what I was doing. However even with the approximately 100 people on the summit, I was probably only interrupted 3 or so times.

APRS coverage is possible near the peak and occasionally on the walk, and so can be mentioned to potential chasers for scheduling purposes. I used a 5W handheld beaconing every 30 seconds, and a ‘signal stick’ antenna poking out of my backpack.

My thanks to those chasers who marked the date in their calendars when I emailed the OZSOTA mailing list, and particularly those who got out to summits for an S2S with me on the weekend. And thank you to those who just stumbled upon my calling CQ and came back to me.

Thanks also to the VK1 SOTA crew who assisted in my activations of a few summits around Canberra in the afternoon of my arrival, a few days before departing for Kosciuszko. I was extremely pushed for time and still managed to get 2 summits in the bag.