Looking at SOTL.AS for inspiriation for my next SOTA outing, I saw a series of closely-placed, accessible high-value summits along an unsealed 2WD road. I planned to activate them on a weekend over a day in late December. These summits are mostly along the Jamieson-Licola Road, a reasonably driveable 2WD track between Licola and Jamieson that runs for 97km (though I would drive only 69km on this road).

The day was planned and totalled about 8.5 hours of driving and a possible 34 SOTA points. 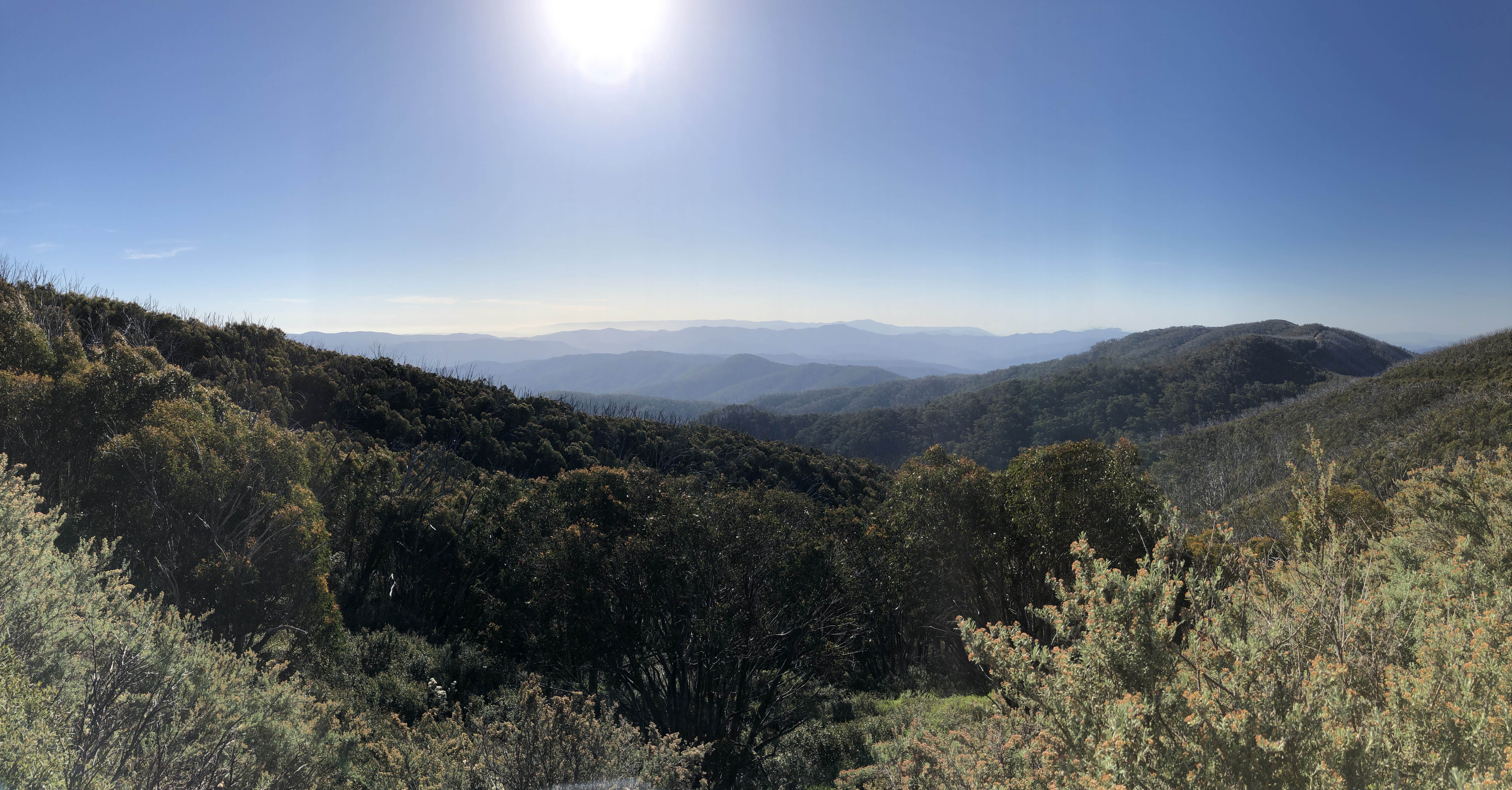 The summits would be Mt Selma, Connors Plain, Mt Shillinglaw, and finishing with the 10-pointer Mt Skene.

Hiking routes are clearly visible when zoomed in further

I set out from home around 7am on Saturday morning. The roads were quiet but the drive was quite long. After the turn-off for Mt Baw Baw, the roads turned to dirt. The quality of the dirt roads was consistently good along the first stretch of road.

To access Mt Selma, I drove past the Thompson Dam along Walhalla Road, passing through Aberfeldy, a small but nice-looking township. After many kilometres, this road meets with Mt Selma Road at point 55H 444201 5835126. Mt Selma Road is rougher than Walhalla Road, however quite passable in a 2WD in dry conditions (summer). It was on this road that I spotted the first tiger snake for the day, sunning itself on the road. It slithered into the scrub as I veered around it.

I left the car around point 55H 449693 5836207 due to rough terrain on the last stretch towards the summit, having taken Mt Selma Track to approach the summit for the last ~100m. I walked up the short distance until I was well within the activation zone.

It was great to be able to complete the on-air activation within 30 minutes, all on SSB. I’m sure given the wind noise on the summit that CW would have been a struggle so I was grateful to not have to resort to that slower mode.

The summit had no view and it was extremely windy, making it difficult to hear faint stations. For the first time ever I felt it necessary to add additional guy-ropes to the 6m mast for my inverted-v antenna, resulting in 6 stakes in the ground to stabilise the mast. However, I don’t hold the weather conditions against the summit itself.

The ground is quite rocky however there enough loose material (rocks, large logs) to use as ballast when a peg for the antenna could not be easily put in the ground. 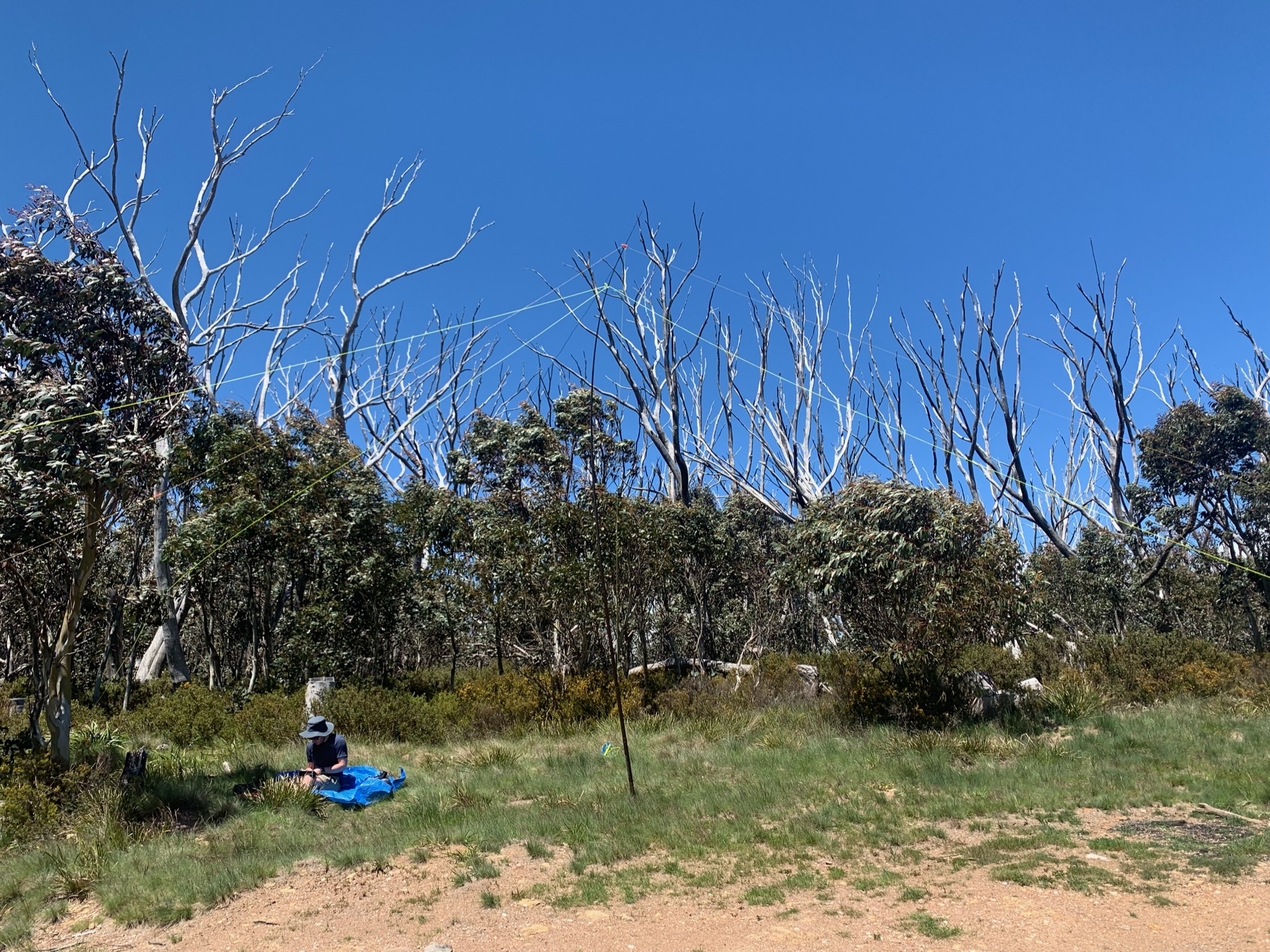 The walk is an easy one as there are tracks made near the tree line that allow a straightforward walk to the summit, with only a little bit of ‘joining the dots’ required to find the way up. 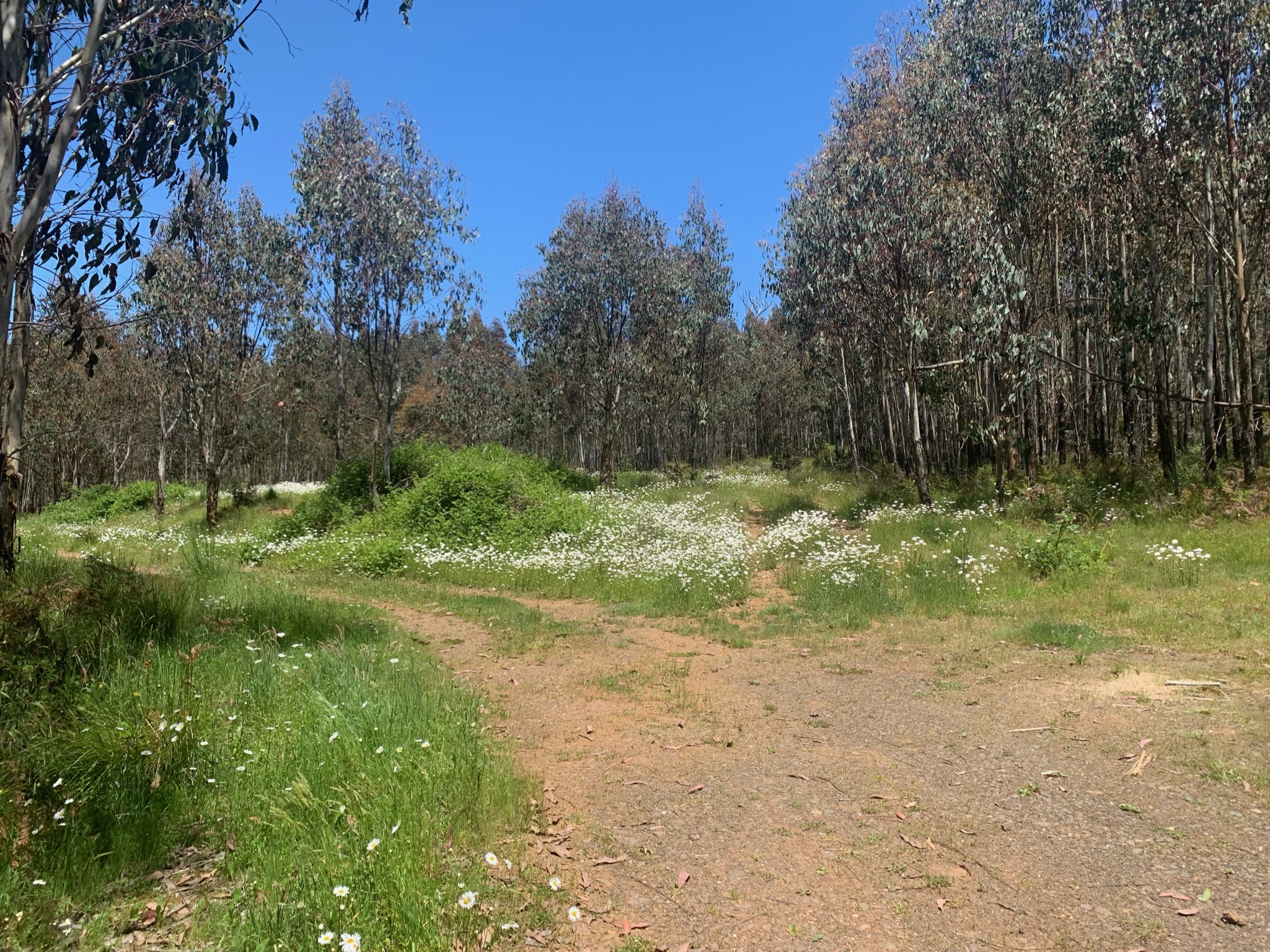 Start of walk. Stick right (shown here in the middle of the shot). 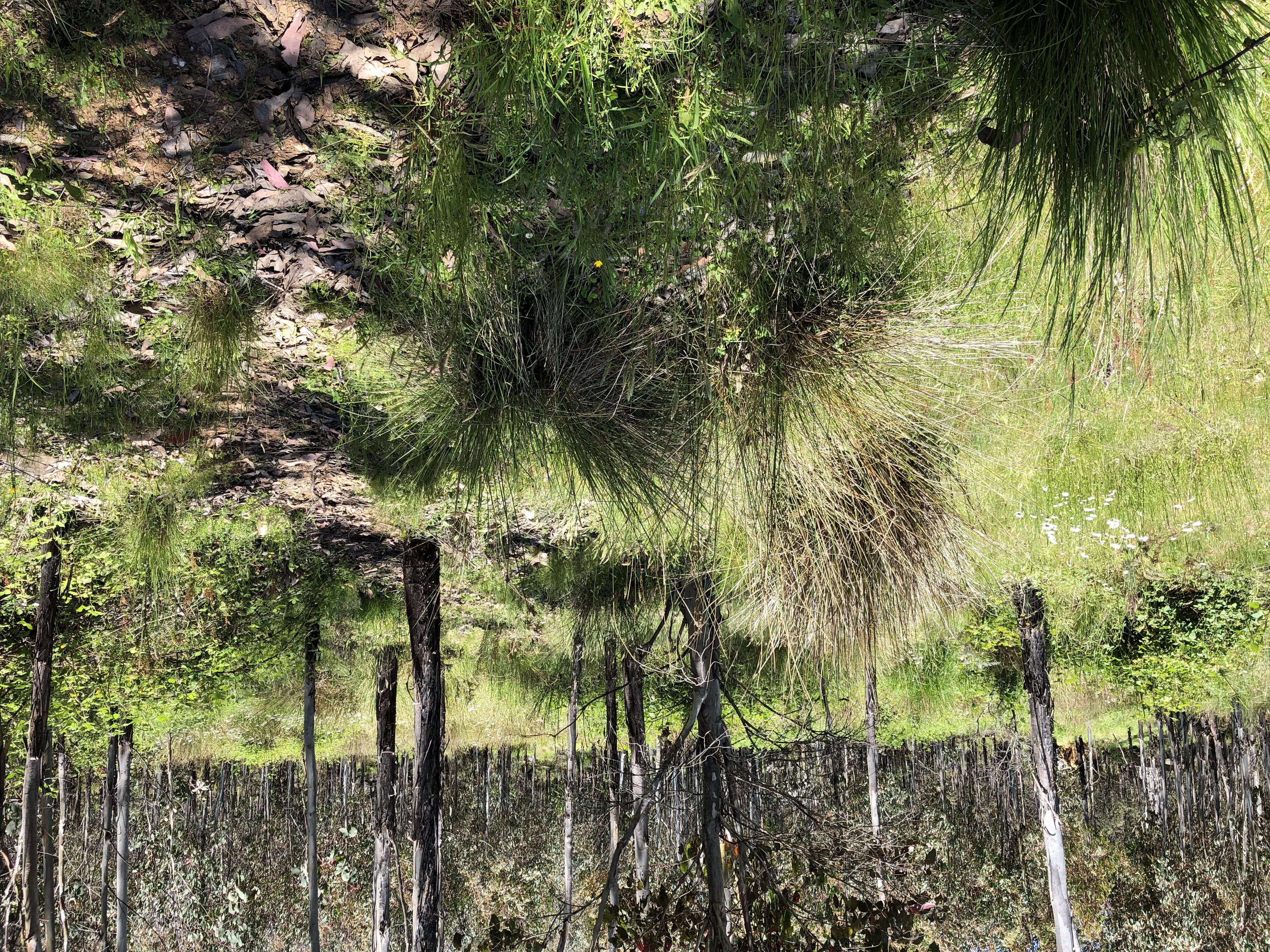 Continuation of path before it heads uphill 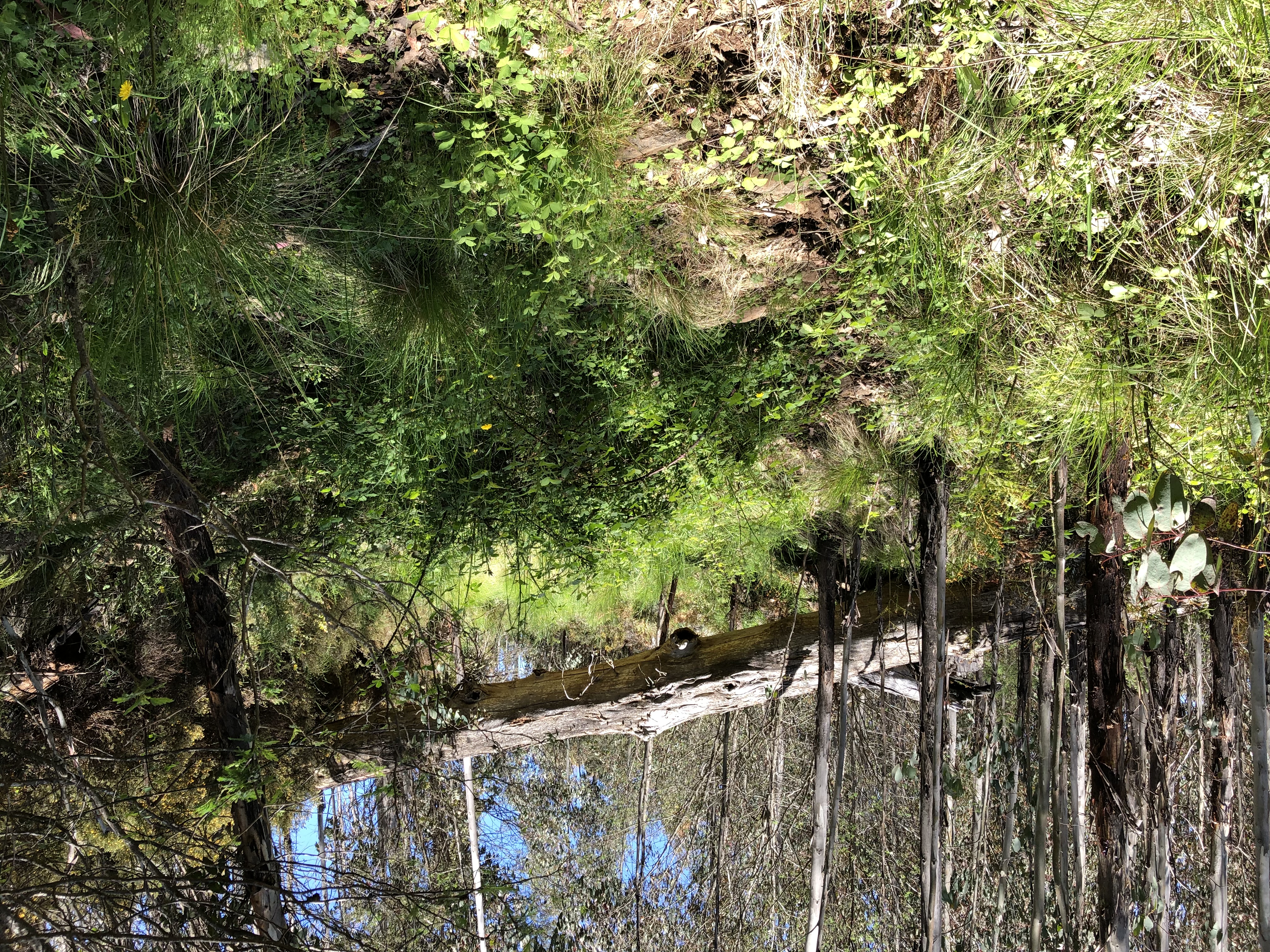 Continuation of path, within metres of the summit

This activation went incredibly well, with an immediate flurry of contacts on 40m SSB with on 10W.

A herd of cows startled me as I was tearing down my station for the day. Alpine grazing at its finest!

I presumably have the cows to thank for an easier path at the bottom of the summit, and they kept well clear once they discovered me, so no complaints bovine or otherwise. There is a reasonable amount of space and shade around the plain, and fine soil for antenna pegs. I was suspicious of the area for its potential to harbour snakes but I saw none.

A mountain out of an ant hill

Mt Shillinglaw in summer does not seem particularly hospitable to the amateur radio operator. Within the activation zone, it seems that every footstep made summons forth hundreds of ants from the ground, so that the lower part of any non-moving object on the ground is crawling with more than a hundred of the insects within seconds. I had started putting out the mast and antenna wires when, upon seeing how blackened by ants they and my shoes were, seriously considered giving up on a summit for the first time ever.

Fortunately I discovered that by perching on a nearby fallen tree trunk, ants would be less interested in me. It still meant lots of furious brushing limbs and clothing when setting up and tearing down, and a little soreness from perching on the solid wood for a long time. But it was relative comfort compared how a tarp on the ground would fare in that environment.

The hike was a little rougher than I expected given it was the Australian Alps Walking Track, which I had thought in this area would be quite well-maintained. My choice of shorts was also not optimal for the amount of blackberry growing on the track, but it was manageable. The track went directly towards the summit along the ridgeline, so I was appreciative of this direct approach and the relatively short walk involved on my time-constrained day.

Midway through the walk we heard an almight CRACK and a tree thunderously came down on a part of the track we had been walking on 30 seconds prior. On inspection it appeared as if the tree had been weakened from the inside, appearing pock-marked and dessicated. The dynamic nature of the bush certainly jolted us into hyper-awareness for the rest of the hike! 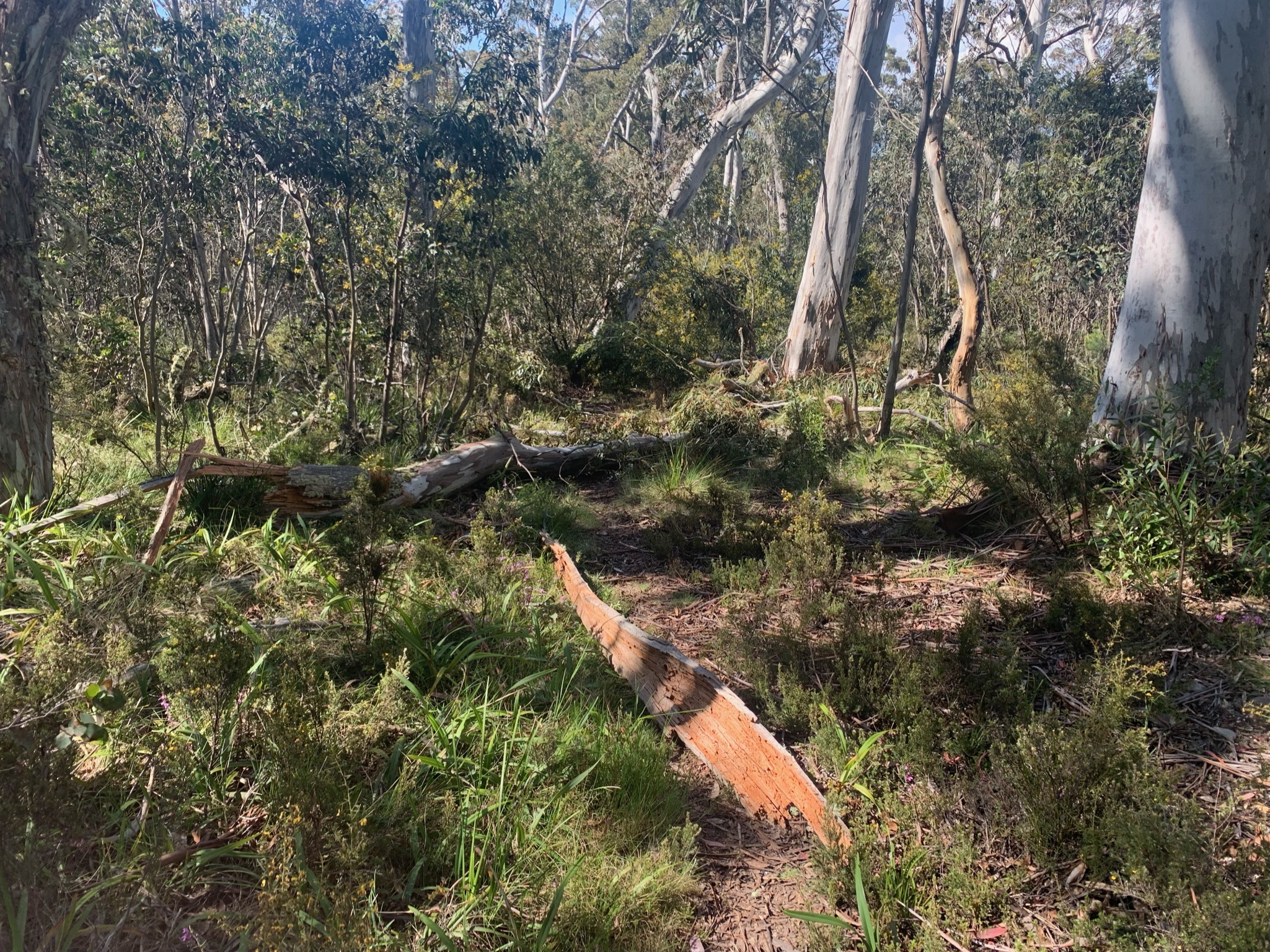 My thanks to Matt VK1MA, who was the first to come back to me on 7.090 MHz SSB. Matt assisted in putting out spots where I wasn’t able due to poor phone reception, including liaising with me on my 7.007 MHz CW spot.

I seemed to struggle to get make the contacts on SSB, which was my preference due to how quick QSOs are compared to my nascent CW skills. However I had to move to CW because SSB just wasn’t cutting it at 10W. 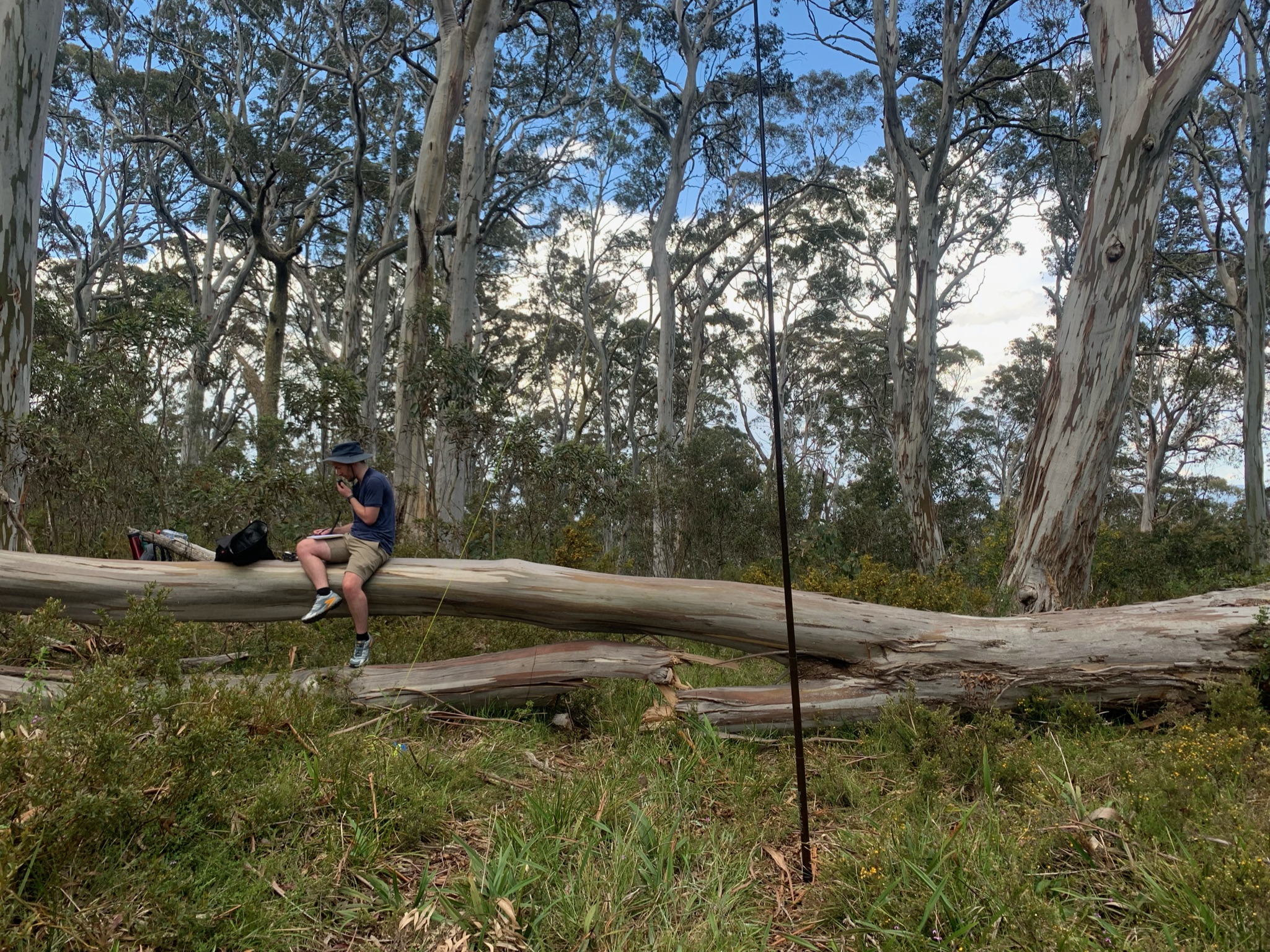 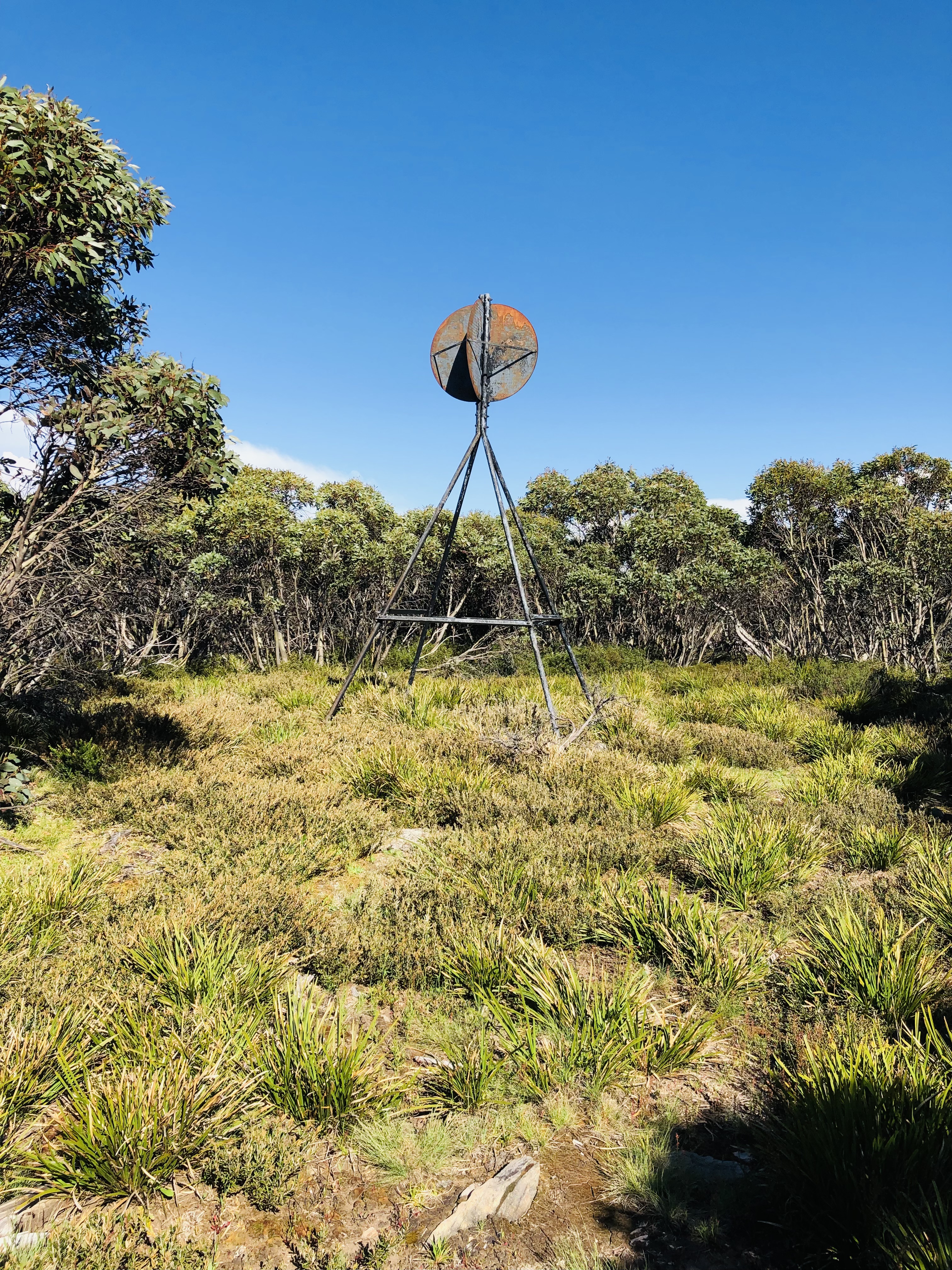 Mt Skene had a similar ground-based insect infestation to Mt Shillinglaw, albeit less overwhelming in magnitude. I was able to setup the shack with a layer of Dupont Tyvex below the blue tarp I carry, providing a reasonable but penetrable insect barrier for a quick activation.

The walk in was straightforward and quick, though did required a higher than usual amount of flexibility due to some fallen trees.

Thanks to Gerard VK2IO, who was the first to reply to my call on 7.090 MHz SSB. Gerard assisted putting out spots, including for my 7.007 MHz CW spot (and then contacted me there to get things going).

As with Mt Shillinglaw, I seemed to struggle to make contacts on SSB, and quickly reverted to CW to ensure I’d get enough contacts for the activation.

Thanks to the chasers and spotters for this day — the logs show a lot of ‘repeat customers’ who were keenly listening out and helpfully spotting me, assisting me with the technical challenge of trying to manage that internet-based activity from the remote Victorian high country. I know there were some stations I just couldn’t make out under the noise too, so my thanks to all stations to managed a QSO with me or tried to make it happen.